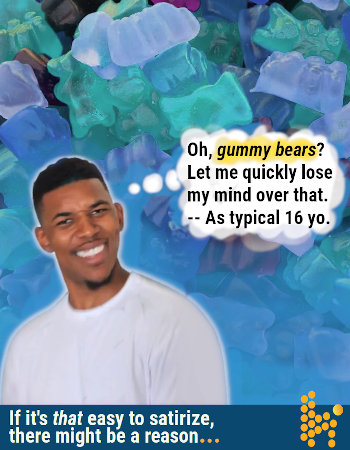 The primary attack from US harm reduction opponents is towards defining flavours in e-cigarettes. It's done under the presumption that only those attract teenagers, or were even "invented" just to addict youths en masse (often paired with tobacco-industry conflation). This rationale primarily rests on flavour descriptors however, and is a clear case of simplistic reasoning.

Albeit the origin can be attributed to opinion papers/reports which 'negligently' confound access-usage in teens with causation. Ad nauseam assertions are meant to distract from other surveyed initiation reasons. (It's largely gadget appeal, btw. Easily solved through clear purpose communication, as proven by the UK.) And consequence discussions of proposed bans are usually eschewed. It's a modal scope syllogism(?) based on the pretext of keeping products out of the hands of children, but with the goal of keeping it out of the hands of adults.

Invariably there's some preoccupation with refuting the disassociative effects of vaping flavours (substituttion of subconscious cigarette perfumation). Or even proclamations that adults wouldn't even use or universally prefer them. (Insinuating ex-smokers have also been tricked into using e-cigs). Which leads to the suspicion among vapers that the ban intent is fostering dual use and relapse to smoking. Or perhaps even causeinganother blackmarket/EVALI-type situation.

Even from a quick glance, some argument variances might be attributable on who advocates for flavour bans:

An oft-cited opinion piece by Dr. B.A.King (who also promulgated the EVALI misnomer) explains the origin of the e-cigarette flavour opposition. It's titelized "Flavours a Major Driver of Youth Vaping Epidemic" for easy misquoting (and misquoted it is: "a" becomes "the major driver"), parrots the "epidemic" FUD, and miscondenses a questionable 2016 report in just two paragraphs:

[...] can harm adolescent brain development and prime the brain for addiction to other drugs.³ The increase in youth e-cigarette use has been driven by multiple factors, including ad vertising, high nicotine content, and the availability of flavors that appeal to youths.³ Youths report that flavors are a primary reason they use e-cigarettes, and most youth e-cigarette users first initiate use with flavored products. Among youth e-cigarette users in 2019, 70% reported using flavored varieties, making e-cigarettes the most common addiction and other potential tobacco-related dangers. [...] nihp/docs/AJPH/OSH/Comment-Flavours-a-Mmajor...pdf

It casually glances over more common initiation reasons, and confounds the access-driven usage for causality. Just like the 2016 surgeon general report did through selective quoting and confirmation bias in the origin papers.

"Tobacco" signals higher toxicity, and attributes the product origin to the tobacco industry. Name-based deterrant is fairly plausible. But not unless accurate descriptions like RY4/RY8 are also banned.

Artifical flavours can't replicate the burnt/smoke/ash attributes of tobacco. Yet come close to the plant-like taste. Which makes them prevalent for dual-use, but less effective so for smoking disassociation. (Which is precisely why there are no nicotine gums with tobacco-ish flavours.)

Big/commercial tobacco companies obviously have a vested interest in having a prevalence of cigarette-like flavours. For Altria/Juul it was an easy cop-out after the backslash to their marketing and purposeful sales continuation to adolescents. (They can easily weather a temporary ban, until smaller competitors are eradicated).

For tobacco companies, the dual-use and relapse attributes of tobacco-ish aromas benefits their heated tobacco products (also somewhat muted flavours). Whose market-readiness coincides with the heated up flavour ban lobbying. And they have the research capabilities to further adulterate combustible cigarette perfumation to align with SNPs.

Just sounds convincing / easily communicable for goodwill.
Or not sticking around for the consequences.

→ This seems to be the main confusion of policy makers. Based on the assumption that the "tobacco" label implies the presumed "appalling" cigarette taste or something.