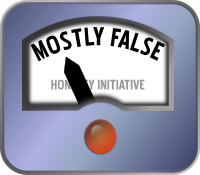 When performance journalism meets retired ideologues, you get gems like this. Based on a flawed study and obliviousness to peer review sites, CNN again doubles down on e-cigarette misinformation. Notably this wasn't tagged as opinion article, but as "CNN health" information.

Claiming that the selection bias of this study disproves any quitting efficacy of e-cigarettes is barely false. The results mostly apply to US context and smokers that did predominantly fail other cessation attempts. The propagated conclusion hence somewhat farfetched. Given the researchers history (very much a rehash of Pierces` previous study), probably a conscious lie. It's another frail attempt at denying empirical reality.

Apart from parrotting PR science and quotes without any hint of assessment, the author employed the usual masquerade. A flurry of numbers and dates obfuscate the lack of substance and rational explanation, as well as lackluster contact to domain experts. Well-established side scares round up the research and writing effort:

UC has a bit of a history with creative interpretation of PATH data. The fatal flaws of methodology and conclusions were quickly documented:

The findings of this observational study of quitting and e-cigarette use in the USA are fundamentally flawed by confounding by severity, whereby the heaviest (most addicted) smokers, having tried and failed to quit using NRT or other treatments in the past, or who have declined to try to quit in the past, then try e-cigarettes.

To render e-cigarettes as “less popular,” Dr. Pierce first gamed the numbers by combining smokers trying any prescription medicine and/or six different nicotine products, four of which are available over-the-counter.

Additional high-quality research would be very helpful, but "preventing relapse" is an all but useless outcome. Unless the researchers evaluate how e-cigarettes are used in the real world, the only thing their next paper will confirm is that asking the wrong question inevitably leads to the wrong answer.

A more important confounder (the study authors play oblivious to), is the anti-vaping FUD ecosystem in the US.
There's little chance of getting a clear picture now on e-cig efficacy, since the relentless harm exaggarations take a toll on user confidence and thus success rates. (And there's no reason to assume this is unintentional.)

The misclassification of e-cigs as tobacco product, and the superficial understanding of "nicotine addiction" should already have disqualified the paper, IMO. Obvious omission of potential COI declaration, cheugy self-referentials of main author, and a bit of buzzword stuffing round up the picture.

Notably I wouldn't score the study as entirely useles. But doesn't add many noteworthy insights to the corpus of academic research. Unlikely to find recognition in the Cochrane report - which still scores NVPs above NRT, despite the concerted FUD campaigns.

Doesn't appear to provide any rationale for not-quitting claims, other than reducing it to insufficient nicotine delivery. It's largely the usual abnegation and distraction from tobacco harm/death reduction.

Technically "Study says, CNN reports" would have led to a "Mostly True" score, despite all flaws in the source. But since Sandee once more resorted to embelleshing claims and battering it up with unsupportable quotes and drivel, "Mostly False" seems apt. Also, you know, it's just CNN.