Stanton Glantz was a renowned anti-tobacco activist, before his attention turned to smearing harm reduction. He left the University of Cali/SF due to extra-academic misconduct, after some of his propagated publications were retracted for significant "conflations". Even WHO and TI have since scrubbed references (previously cherrished) in most position papers. 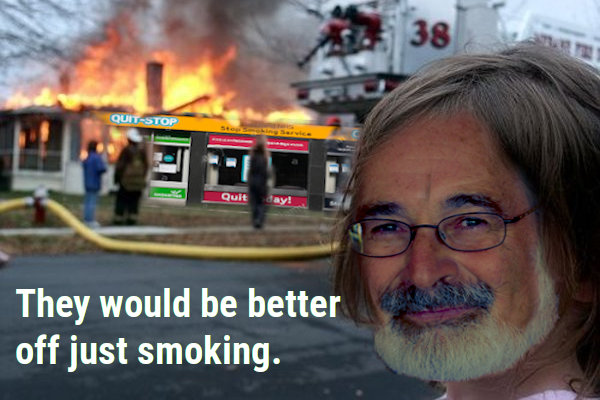 His outrageous claims also gave him meme status among vapers.

In context, he might have been referring to dual use here:

Using e-cigs increases exposure to toxic chemicals for most users; they would be better off just smoking.
https://tobacco.ucsf.edu/using-e-cigs-increases-exposure-toxic-chemicals-most-users-they-would-be-better-just-smoking

His retracted study was commonly persiflaged as:

E-Cigarettes can cause heart attacks ten years before they're used.
https://pubpeer.com/publications/F177153E02CA8B3E7B9E70BC8DB204

Obviously he was also on top of EVALI, mostly to refurbish older claims. But at some point got real mad about being disallowed to buy THC vapes and/or the CDC not implicating ENDS enough:

FDA and, to a lesser extent, CDC, are focusing on the THC devices and downplaying the nicotine devices.
DEA is obstructing figuring out what is causing electronic cigarette/vaping lung injury

Responses to the cessation efficacy denial paper: "Publication of this study represents a major failure of the peer review system in this journal." and "This review is not scientific.".