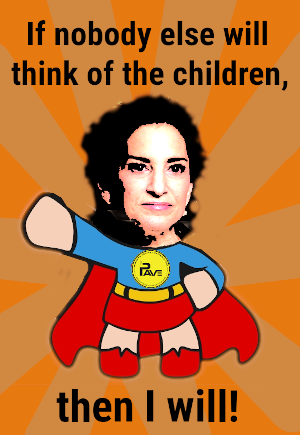 PAVe was touring local and federal hearings after Bloomberg/CTFK set up the US teen vaping framedemic. They might not have initially, but got funneled parts of the 160M anti-vaping sponsorship (BP → Union → CTFK → PAVe). They're largely comprised of middle class / suburban soccer moms, so disrespectful/misbehaving kids are plausibly world-shattering. (Note: the organization certainly also contains parents who are genuinely alarmed by addiction fears. Mostly due to the parallel media/scare campaigns.)

Their arguments are copycat CTFK talking points. But they're much more effective at playing the Think of the children! card. They might easily be mistaken for a puritanical movement, given the prohibitionist agenda. The presentation is always centered on emotional pandering however. Or straight up crocodile teariness to obfuscate the amorality of their plea (sacrifice current smokers for exaggerated teen addiction claims; nvm. driving lower income teens back to smoking).

Interestingly there's some clinginess to fairly absurd claims, mostly as hedge arguments though. But they clearly undermined the plausibility of the more convincing/emotional concerns.

⚠ From memory. Not looked it up again. It's nothing outstanding really.
→ If anyone wants to fill the gaps?, edit away..

Now this I found interesting. DrsTV: The E-Cigarette Loophole: Synthetic Tobacco where DMS angered Meredith after "kids are too smart for this". She again claimed not every of the EVALI cases was down to THC vapes, because the "CDC said it wasn't conclusive" (and citing new parent letters). Apart from the rant trigger, this might be both habitual and partly statistics superstition.

Meredith relayed that her interest was sparked by a Juul "representative" tricking her sons` school into giving free classroom ad time. https://www.youtube.com/watch?v=PfX09arUAEI
Now this can easily be attributed to simple reasoning / the usual exaggeration pattern. And what more plausibly triggered panic was indeed the son already "juuling" at the time.

But the organization title might well contain a few freudian slips.

⚠ Caveat: most of the lengthier write ups originated in rightwing-ish(?) think tanks

Ticks all the red flags. (Looks like a duck, quacks like a duck, and was payed by the mother duck). It's still fairly plausible that PAVe started as scared mom group (very real and perceived dangers). It was also clearly co-opted around July 2019.

But say what you want about Americans. At least they get involved in politics. If not for financial reasons, then for lies.

Although I would generally attribute this to US elbow culture. Symptomatic interests aside, at its core it's selective public health and disdain for a lesser group.