Filipino health organizations originally considered a complete vaping ban in 2019. It since emerged that the FDA’s stance on full or partial bans was swayed by Bloomberg Initiative grants. After disclosure and clarifications from local advocacy groups (Vapers PH, and CAPHRA), the Philippines’ senate now passed risk-proportionate regulations for e-cigarettes and HTPs (tobacco toasters).

It should be noted that the FP-FDA sought out the policy-inducing grants (which officials later admitted) itself. But Bloombergs interference can be assumed the modus operandi in LMICs and the APAC region at large. It's testament to the American superiority complex and the lackluster scientific foundation of their anti-vaping stance (wouldn't require bribery if it had legs).

Ranti Fayokun from the WHO TFI bureau triggered the scandal, due to using overtly blatant disinformation in a presentation before the PH senate: 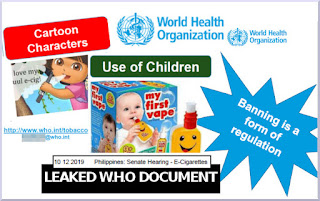 It's almost like the WHO didn't consider the Philippines worthy of believable FUD.

Government warning: This product is harmful and contains nicotine which is a highly addictive substance. This is for use only by adults and is not recommended for use by non-smokers.

It only hints at the purpose, but seems workable phrasing already.

Dorotheo said there is no evidence that vaping is "significantly less harmful" than cigarettes.

There doesn't seem to much consistency between the various groups. But gave up on figuring out what they wanted (late efforts seemed more about sustaining misinformation and smear campaigns than still glamoring for illegalization). The 18vs21 talking point seemed genuine🟩, even though idiotic (when smoking is available for 18yo's, but harm reduction wasn't).