No reputable scientist questions the starkly diminished risk from e-cigarettes. Since dependency retention and profile remain higher than in NRTs (a far cry from tobacco still), the inherent harm reduction is often disregarded: 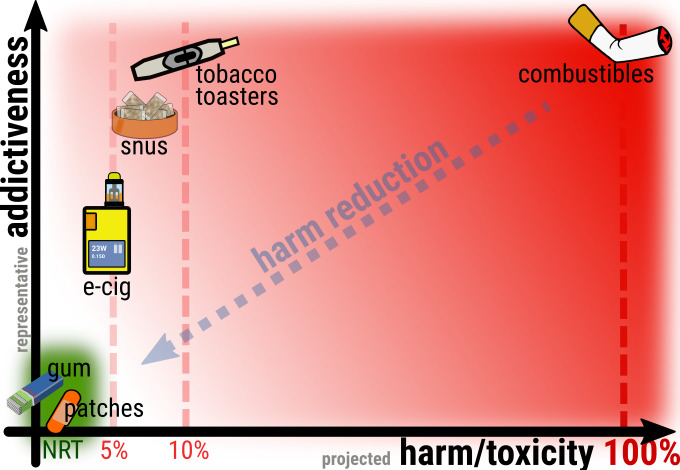 Colloquially it's the misperception of nicotine being the harm carrier. Rhetorically the conservative "95% less harmful" estimate is often subjected to denialism Mostly to validate minutae exaggarations, and insinuate heightened risk potentials, or to straw man that e-cigs were declared harm-free.

It's sometimes an assumption based on scientific distrust or observational concerns. If the vapour is equivocated for smoking, then any quantification becomes emotionally irrelevant. (Occasionally just disdain for ex-smokers.)

More frequently a negational conclusion is drawn. In particular "If it's not wholly harm-free, it must be dangerous" appears in various forms.

In part the misconceptions stem from comparing e-cigs to air. It's usually a rhetorical tactic, to discard the actual purpose: harm reduction.

"Precautionary principle" is oft used as cynicism to disregard the existing body of evidence on reduced harm for e-cig switchers - and keep subjecting smokers to the known (disproportionally higher) harms. Inordinate risk projections are thus actually violating the PP.

In any case it's based on the notion that harm/risk reduction is insufficient, and insisting solely on risk elimination was realistic. Which is usally described as the puritanical / abstinence-only orthodoxy (zero-risk distortion). This is often presumed to be an indicator for pharma-ties, albeit the hint to only use medical cessation products (NRTs, psychopharmaca) is better explained by regulatory/liability worries.

See also popcorn-news for some of the dated refrains.