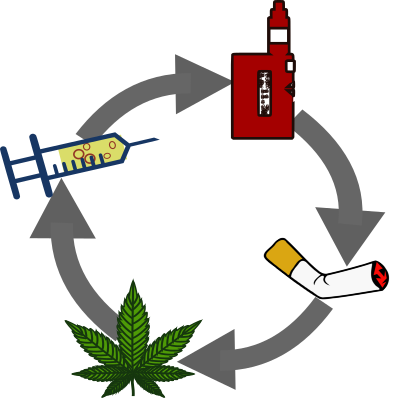 "Gateway drug" hypotheses are easily debunked. By you know, just casually glancing at any usage statistic. Smoking goes down, whenever vaping goes up. Bidirectional substitutes.

Claims to the contrary rest on misquoting studies and extrapolating individual/cohort observations into a generalized probability. On the population level (and seemingly also teenagers), vaping is observably a gateway out of smoking. (Doesn't imply non-smokers should be encouraged). The general gateway theorizing largely stem from prior claims to such effect (also long debunked), or the visual misdiagnosis. Which is also why it's often just a fallback scare for "nicotine addiction" claims. Sometimes just a linguistic fallacy, with "could" and "might" doing a lot of heavy lifting for the argument. (It's a dependent premise, as e-cig harm exaggarations rarely hold up to scrutiny.)

Statistic on US hysteria

Despite the gateway hypothesis being fairly prevalent in media and a subset of academia, not so much in reality. US teen smoking🟫 and daily smoking🟥 went down alongside the variance in infreq/freq vaping🟦:

For exact quantifiers see Brad Rodu blog: Sharp decline in high school vaping as smoking is almost eliminated. Albeit doesn't differentiate between infrequent and daily vaping, explains the conflation of THC vaporizers into those CDC stats.

Adolescents trying adult things is kinda their thing. And attention seekers can be predisposed to try vaping. On an individual level (→ which is what most "gateway" studies observe) they might also start smoking (later or beforehand). Not because of the claimed heroin-like effects, but because nicotine e-cigarettes are comparatively boring. Any migration to smoking is more plausibly explained by the lackluster intoxication and fairly delayed effects. (Except for the US with balooney non-regulations and excessive nicotine concentrations.)

Albeit the flavour degration for any substance use "upgrade" from e-cigs to tobacco poses a marginal deterrent still. (Even from mint vapes to menthol cigarettes). -- Btw, the simpleminded conjecture flavours cause vaping, and then vaping leads to smoking is just that: simpleminded.

population gateway: out of smoking

Individual-level gateway effects are rare, else we would see an according effect at the population level. But smoking rates are declining even for teenagers. More even, an accelerated decline in teen smoking was particular during the "teen vaping epidemic" in the US. (Albeit even the frequent-vaping uptake can't explain all of it. Can't draw many conclusions from it either way.)

The "x times more likely" claim thus can also be interpreted as a prevention potential. (Undermined by portraying combustibles as no more harmful than vaping.)

"Renormalization" is a common pessimism to insinuate rising smoking rates. Which of course, they aren't. It's largely based on the visual misdiagnosis that "vaping looks like smoking". Which is essentially a technophobic mix-up - that millenials aren't as prone to as policy makers.

As described in the paper, while there has been a considerable uptake of vaping by youth in the United States, smoking prevalence has decreased, suggesting no overall gateway effect. However, scientists warned that the recent phenomenon of the use of e-cigarettes by youth cannot dismiss the chance that if youth prevalence of e-cigarette use increases and is sustained over time, the result might be an increase in the prevalence of combustible tobacco use. https://cataniaconversation.coehar.org/2021/09/03/electronic-nicotine-delivery-systems-are-safer-than-conventional-cigarettes-a-clinical-investigation-advises-on-fda-decisions-on-ends/

Albeit there hasn't yet been the proclaimed epidemic of teen or general vaping. But if there was, the argument might hold some clout. It's not likely that 20% of the population (= all current smokers) would switch at once to vaping. But hypothetically, if, then it could drag social acceptance along. If not smoking per se. (But I guess that explains the thought process behind "renormalization".)

See ATFs and flavour-fallacy on why "tobacco"-like aromas could be more problematic; by lowering the barrier to migration between e-cig and actual tobacco products.

The most prevalent misrepresentation stems from cohort-level observations, and misrepresenting statistics into causation.