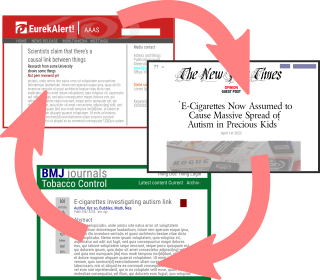 All research is affected by preconceived notions. Some methodologies are meant to avert them. It remains unrealistic to prevent all cognitive biases. Which is why academia often prefers ambigious phrasing and super reserved language. Most anyway.

Tobacco control is particular in that not all slants and proclamations are accidental. The diversion between papers and floated press releases is sometimes planned for. It exploits the news medias` dependence on spectacle over balance.

Most research funding comes attached with strings. Some more than others. Bloomberg no less than tobacco industry grants. The disingenuity doesn't stem from the topic focus, but how it gets slanted in press releases.

Papers are often cautious with "associated with" or walking the hypothesis back in the limitations section. But when the same authors then write and agree to summaries in EurekAlert, phrases like "might" and "could" or even "causing" and "leading to" are not uncommon. And this is how journalists often get tricked. The appearance of officiality and appeal to authority, paired with time pressures, often lead to media outbursts on ventured vaping risks.

Institutions should generally take a hands-off approach to not hogtie academic freedom. Which however does not mean that blatant FUD should go unnoticed by internal peer review or oversight boards. Some orgs have aquired a bit of a reputation:

Important: Should not disparage all researchers. But journalists should be aware of the slant frequency. (It's largely a failure of the journals, of course. You can't just play oblivious to accompanying press notes.)

Awareness of Wakefield-style "science per press conference" has clearly waned.