Think of the children!
(but not too much) 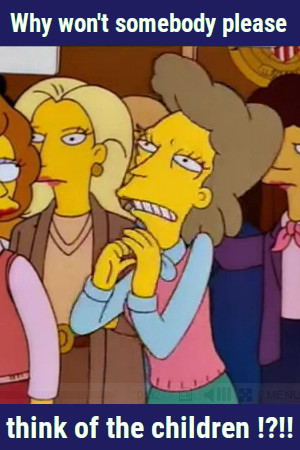 A rhetorical tactic that's absurdly prevalent still in the United States. While it was originally used for genuine child protection, it's now regular part of pressure campaigns. Where the welfare of children is used as pretext for achieving otherwise untenable goals. (Recently by anti-vaping as well as anti-mask/anti-vaxxer scaremongering.)

When misused it's usually as part of an orchestrated FUD effort, and any repercussions of the implied goal are categorically discounted. (Abstinence obsession driving teens back to smoking, or worse substance use.)
It's based on the appeal to pity (often representing teenagers as incapable or daft), and can be detected by misrepresentations in supporting arguments or scares.

Come to think of it. It's less of a fallacy,
but more of a charade in US politics.

It should probably be pointed out that TC always relied on using teenagers for advocacy. Lawmakers aren't known to get invested in tobacco policies without emotional appeal. (Depending on health insurance ecosystem.) TC academics are sometimes quite apologetic about prior such tunnel framing.

That being said, US groups might be overstraining that argument now. The results of e-cig bans are entirely predictable. It's unlikely this won't effect future regulatory efforts. (To the detriment of actual tobacco use.)