As part of the US anti-vaping FUD, some astroturf groups extensively used misrepresentations of teen use statistics to bolster their scare. Claims of "28% of children are vaping" were used to obfuscate the relatively low daily/regular use from experimental consumption. Going so far as to proclaim instant/invariable addiction even. And of course completely ignoring any context, such as the accelerated smoking decline.

It was a largely artifical scare, possibly even being caused by the very same groups - who stoked teen curiousity through reckless anti-vaping ads (more so reckless than e-cigarette vendors). Most scientific circles are appalled by the squanderous use of the term 'epidemic' even. (It's neither transmittable, nor even appropriate terminology for an otherwise habitual ongoing.)

Notably the "epidemic" moniker was crafted by the FDA based on NYTS 2018 data. They gloated about this being a framing campaign and well-testing with the target group: »THE SCIENTIFIC FACTS IN THE "EPIDEMIC" CAMPAIGN« (PDF/p.21) 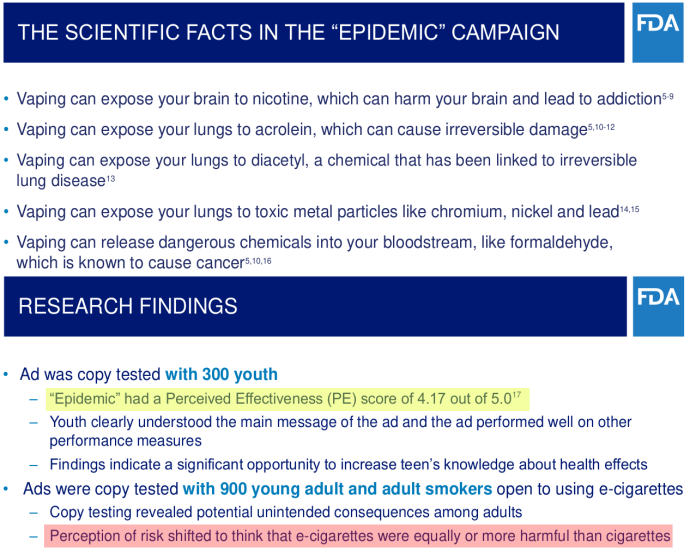 Note how their Real Cost campaign (started Sep 2018) predates the height of experimental use.

The vaping framedemic had some repercussions for the real pandemic however. It was not just undermining messaging or eroding credibility of public health orgs, but delayed actual action.