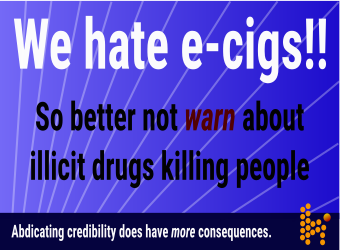 EVALI was a 2019 case cluster of acute lung injuries, largely confined to the US. It was (reluctantly and belatedly) verified to be caused by contraband THC vaporizer cartridges, diluted with vitamin E oil (tocopheryl acetate). The CDCs opportunistic misattribution to nicotine e-cigarettes started the anti-vaping hysteria. But necessitated auxiliary lies for early e-cigarette bans in the US.

Notably the origin cause was long documented by independent journalists, researchers, the FDA, vaping and cannabis industry. But the CDC purposefully rescoped the acronym, misdirected investigations, while guising themselves as being "data-driven". The intentional smear campaign required leaving THC users in the dark, thus raising the death toll to 68. Until a real pandemic forced the CDC to resume public health activities.

The redeclaration from "VAPI" to "EVALI" was likely promulgated by Dr. Brian A. King of the CDC OSH. (He also misconstrued summary reports to validate the flavour-fallacy). Notably his job would normally entail making scientific details more understandable to the general public. Looks like he took ergo-harmful to a whole new level:

KING: this is brian king. We do know that e-cigarettes do not emit a harmless aerosol. they can include a variety of potential harmful ingredients, including ingredients that are harmful in terms of pulmonary illness. That said it’s possible that the reported cases could have been occurring before this investigation was even initiated in an event that we weren’t necessarily capturing them, but now there’s increased diligence in terms of the current investigation that we’re better able to capture those. That being said, the available science does suggest that the constituents in the aerosol could be problematic. We know there’s a variety of intended and unintended constituents in these products so as we continue with the investigation it’s important to keep all options open and identify a variety of ingredients. At present we haven’t isolated a specific source but we know there’s a variety of constituents in e-cigarette aerosol that could be problematic in terms of illness. RW: 2019-08-23 telebriefing on severe pulmonary disease associated with use of e-cigarettes

Later continued with a diatriabe on ultrafine particulates, heavy metals, diacetyl; shortly acknowledging THC use, before resuming the long-held disdain for e-cigarettes. Dr. Briss and Dr. Krishnasamy might also had a hand in the origin misdeclaration.

Sementically the implication of e-cigs in lung injuries wasn't far off from "vaccines cause autism". A couple of months later, the same media organizations are feigning confusion on where anti-masketeers/anti-vaxxers might have drawn their legitimization from, or where the distrust in public health orgs/messaging was furthered.

This also seems somewhat lost on some. But THC vaporizers aren't even technically e-cigarettes. They look similar (oftentimes older eGo-class pen devices), but require different atomizers for THC liquid (MCT oil base, hydrophobic). For its higher viscosity, ceramic coils are necessary. The cotton+heating wire setup in e-cig atomizers are only reliable with PG/VG mixes (polyol/diol alcohols, water-soluble). It's fairly rare to have PG/PEG400 liquids that would even work in common e-cigarette atomizers, because THC doesn't often stay diluted well in there.

This is fairly interesting, from a technical standpoint. Albeit mostly resolved now, some activist slant found its way into WP articles on e-cigarettes and EVALI.

From twitter: The CDC has rejected an interdisciplinary request to fix the naming. Insisting on acronym regurgitation, self-reports, pretend-search for further contaminants and negational cause disproval.

More interestingly, it seems while Brian did the publicity work, the misdeclaration perhaps orginated with Dr. Briss or Krishnasamy: https://www.cdc.gov/media/releases/2020/p0507-2020-service-medal-finalists-honored.html

The most suitable/enunciatory alternative that emerged since is VEAVALI (vitamin e acetate vaping associated lung injury).